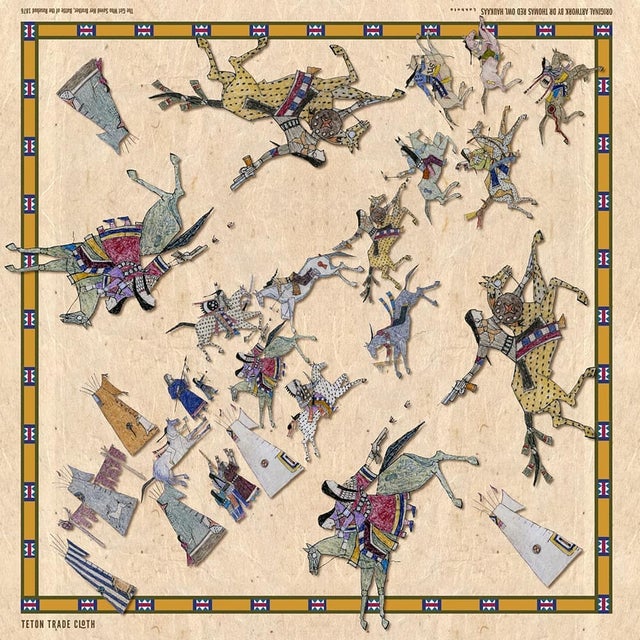 Designed by Dr. Thomas Red Owl Haukaas (Lakhota)The Girl Who Saved Her Brother Bandanas featuring original ledger art on handmade paper by Dr. Thomas Red Owl Haukaas. The Battle of the Rosebud occurred in June of 1876. It was one of the battles that built up to the Battle of the Greasy Grass, also known as the Battle of the Little Bighorn, in which the Cheyenne and Lakota defeated General Custer and the 7th Cavalry. At The Battle of the Rosebud, the Lakota and Cheyenne were allied under the leadership of Crazy Horse, fighting against General George Crook, his army, and scouts from rival tribes. During the battle, the Lakota and Cheyenne took heavy casualties and were in the process of retreating. One of their war chiefs, Comes in Sight, was left wounded on the battlefield. His sister, Buffalo Calf Road Woman, saw her wounded brother, mounted a horse, and rode toward the dangerous forces to retrieve her beloved sibling. Pulling him onto her horse, she carried him to safety. The Cheyenne and Lakota forces saw her valiant act of courage and were so inspired that they rallied together and rode back into battle, forcing the enemy to retreat, winning The Battle of the Rosebud. Buffalo Calf Road Woman (1844-1879) also fought in the Battle of the Greasy Grass alongside her husband, Black Coyote, in June 1876. It has been recounted by the Northern Cheyenne that it was Buffalo Calf Road Woman who struck General Custer, knocking him from his horse with a warclub, where he was later killed after being dismounted. Buffalo Calf Road Woman is presented in this traditional ledger artwork by Dr. Thomas Red Owl Haukaas (Lakhota) as a heroine of the Cheyenne and Lakota people and to serve as an inspiration to others. Haukaas, an artist renowned for producing museum work in various mediums. Thomas serves on the Teton Trade Cloth Cultural Advisory Board where he shares his wisdom and cultural views with fellow advisory board members. His input plays an integral role in shaping the direction of the company and the impact that they have on the larger Native community. Teton Trade Cloth is honored to work with Thomas on this historically accurate, monumental piece of work and hopes that it serves to inspire people to make not only great art from this material but also to examine the impact that one individual can have. Oversized, 24 inches, 100% cotton, soft vintage feel. These are the finest on the market. These bandanas are large like old vintage bandanas, they fit, feel and look better. Made in USA Buy all 5 and save!